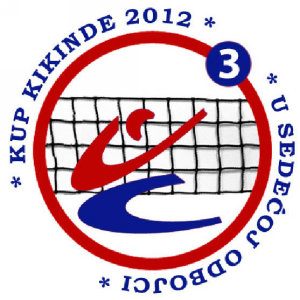 This is how we invited our audience to the Tournament.

Also visit the separate page with vast photo collection made during the tournament...

After anthem of Serbia was played, a warm welcome to all present was made by Mr. Milan Živić, who is the laureate of national award for achievements in sitting volleyball, and one of the founders of our club. He wished to the guests a pleasant stay in Kikinda, good and fair games to the contestants, but the most of all a good friendship. He wished to Serbian national team and Feniks to reach together the distant goal which is now the Paraolympic games 201h, because Paraolympics in London has just begun and so far our "Operation London" failed.

Our special guest, manager of OK "Vojvodina NS Seme," Mr Vasa Mijić said he is happy to promote this sport, he highlighted the importance of such events and he wished everyone good luck in the contest.

The citizens of Kikinda and the guests had the opportunity and pleasure to see competition of the six great teams. Neither one of them hasn't competed in Kikinda yet. It may sound immodest, but concerning the names and reputation of these teams, this is the best tournament so far of this sport in Serbia. We've made every effort to make it really true, but did we succeeded? That can be judged only by those who were present. To you, our dear readers, we are placing the part of this sporty and friendly atmosphere through the text and images, and so you can bring your own review.

Let's make a short review here: Kikinda Cup was first organized in year 2009, and then 2010, as a four team tournament. Unfortunately, this tournament was not held in 2011. So far, teams from Banja Luka, Brčko, Belgrade and Szeged participated.

This time we invited teams who have something more to show, prominent teams from neighboring countries, and why not to say it, these are all teams that have much more success in their history than us. At the same time we returned the hospitality provided by these teams.

1. SERBIAN national team was placed 7th at the European Championship in Rotterdam 2011th and won the fifth place few years earlier. We had the honor to provide the first official appearance of this team on the territory of their own country.

2. IOK "ZAVIDOVIĆI" from Zavidovići, Fed. BiH, in the previous season they were the fourth placed club in Premier League, the strongest European leaguee, from the country which national team is "subscribed" for the European gold medals.

3. OKI "ISKRA"; from Bugojno, Fed.BiH, as the first placed team in the Fiest league in last season they will compete this season in the Premier League.

4. OKI "MARSONIJA" from Slavonski Brod, Croatia, is already 7 years in a row a member of the Croatian first league, once even a runner-up. Last season they won the fourth place in croatian First league among the 14 teams.

5. "SPRINT" SC from Szombathely, Hungary, is a longtime participant in ECVD league and our well known tough rival for the third place in league of Hungary.

6. OKI "Feniks", yours truly, the team of organizers and the host is the current champion of Serbia and Vojvodina. The news that we are the champions of Serbia for the previous season was finally made official, but we'll say more about it on some another occasion.

As we always want to learn some more and to asure the fair trial we invited a referee from Hungary, our good friend, Mr József Benkő, who has over 20 years of experience in refereeing of sitting volleyball. Well, he has fully justified our confidence. Besides him, the referees were from UOSO Kikinda, who gain occasional refereeing experience of sitting volleyball being with us.

Organizing this tournament wouldn't be possible without help from many people of good will. OKI "Feniks" is very much grateful for the assistance provided to the following institutions:

Acknowledgements for the help and support in promoting this tournament was handed to Mr Mijić by the president Dragoslav Đuričin. Thanks to the cooperating bonds between the two clubs, this news can be followed also at the OK Vojvodina website. Gifts to the host team captains were presented by our coach Branislav Dragin.

The Member of the Executive Council of the Municipality of Kikinda in charge of Youth and Sports, Ms. Dragana Dukić, has expressed here delight on organizing this tournament and wished a good luck to the contestants. She pointed out the special joy of the essence of this event, which is to connect people in this area and participate in the recovery process of the broken relationships between people. She then formally declared The 3rd International Tournament in sitting volleyball "KIKINDA CUP 2012." opened. A special acknowledgement to the Municipality of Kikinda for help in the organization of this unusual event was handed by president Đuričin.

Members of the Dance club Fiesta than performed a delightful dance to all of us.

Summary of results and comments

It seemed that the battle between David and Goliath started very equaly, in both sets. In this story we were, of course, "the little one with a slingshot". Just when we hoped we will win the set our opponents made a series of good moves, combined with our carelessness. No, there was nothing new. Miracles do not happen every day, and the score remained expected.

In the derby of our group we had hoped the replay of the one in this year's Hungarian Cup. We had a great advantage and a serious chance of winning. It is even likely that the quality of the teams on the terain was in our favor, but we could not use it. It was a good and combat game, but this time guests were able to take advantage of their experience in some key moments.

The Hungarians gave a slight resistance, and then they quickly surrendered in the second set. Maybe it was the only match of the tournament, which does not worth attention. Zavidovići routinely completed this game in their favor.

Placement in group A

Heating up and playing the first game in the morning can quite often be problematic. When it seemed that Croatians hold the match under control, Bugojno woke up and started to play the best they know, catching up and overtaking. In the final set they were worn by the desire to win and they knew how to use it. A great game with a lot of uncertainty.

Being aware that they missed a good chance in the first game of the Marsonija started strongly and without major problems, won the first set. Correcting tactics, by better services and greater involvement has brought Serbia to win the second set. In the third set, the Serbian national team made several inexplicable errors, which gave an unattainable advantage to the opponent in the deciding set.

This game has also brought great sitting volleyball. The first set was relatively easy won by Serbian team. In the second set Bugojno team was reminded that they know how to play. With a great effort of all the players on the field and the fan support that came from the bench, they won the second set. In the deciding set they had two match points, but failed to seize them. One of them would provide them the first place in the group, but ... If we made the contest for the most uncertain match of the tournament - there is no doubt that this is the one. Better luck and courage in the end had a team of Serbia.

Placement in group B

After the victory of Serbia over the team from Bugojno followed exact math and miraculously cruel outcome in this group. This was especially true for the Iskra. Based on points ratio they will compete for the fifth comforting place, instead of the final! All teams in group B had one defeat and one victory with 3:3 set quotient. So, only few points in the direct encounter brought the prevail.

For the 5th place:

Indisposed team of Iskra lost the first set, as usually today, but than they won the second furiously. By seeing the car is going downhill, our Mourinho rested several players for deciding set. This maneuver did not failed,as after a close battle until the very end of the match Feniks came out as the winner. This victory is not a real ratio of the two teams powers, but the opportunity to win over the better team was utilized, which is a good investment for the future.

For the 3rd place:

Marsonija was superior in winning the first set. Relaxation nearly cost them a loss of the second, because Hungarians were very awkward team even in this composition. They proved it in this tournament. (According to a subsequent agreement of the organizers and teams, this game was played in two sets obtained.)

For the 1st place:

It was the fierce battle throughout the game. When it seemed that Zavidovići team was defeated, they found new strength and the situation has turned around in no time. The Serbian team in 3rd and 4th set looked helpless against the onslaught Zavidovići, where everything worked perfect. In the fifth the set, the situation turned back. Zavidovići had no more concentration and a few mistakes decided the winner.

Than a pleasant gathering of players took place in the restaurant of the youth village, where trophies for placements and awards were handled. The trophy for fair play was assigned to team KSO "Iskra".

Local TV and radio broadcasters followed tournament decently. Solid amount of news appeared in press and on the Web: 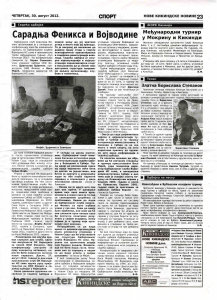 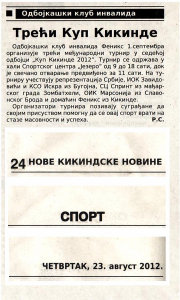 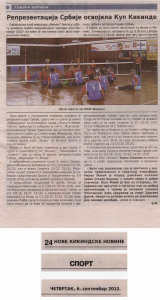 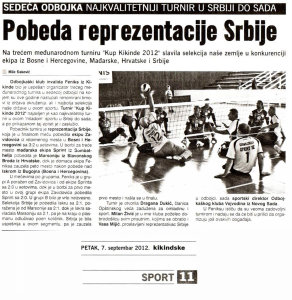 The results were unambiguous and undisputed, but some skepticism reigned when one look at the facts from a variety of angles:

There we can find a lot more of this to comment, but what is the most important to us is that everyone has gone home healthy, cheerful and smiling, with a desire to return back to our next year tournament. Precious!

Also visit the separate page with vast photo collection made during the tournament...